So with my certified Kook Badge pinned securely to my chest one night, I presented my idea to Steve:

But here’s what was rolling around in my head:

I knew Steve would pick out a lovely card for me, just as he’d done every year.  But this particular year I wanted to shake it up.  Get out of the box.  And allow the LORD an opportunity to speak His word to us on our special day.

I knew the Lord could do it.  What’s more, I sensed the Lord wanted to do it.  And I explained to Steve that I envisioned us shopping for the card together on our anniversary until we landed on “the one” we just knew was from Him.

“Sure!” Steve answered enthusiastically.   He liked the idea.  He was all in.  He’s a kook too.

Now I was excited.  I just knew the Lord was about to do something wonderful.  Our upcoming anniversary was destined now to be a true adventure!  A kind of heavenly treasure hunt.  Searching together until we found “the” very card, filled with “the” very words we sensed the Lord Himself speaking to us on our special day.  I was stoked.

What would the Lord say?  What would the card look like?  Would it be funny?  Serious?  Sweet? Where would we find it?  Who knew?  I just knew I was excited, and so was Steve.  This was going to be FUN!

First we went to this store.  Ehhhhhh……nope.  Then that one.  Hmmm….nope.  Then another.  Nope nope.

Not to worry, we told ourselves.  The day’s still young.  “Keep on keepin’ on,” that’s our motto.

No.  Not yet.  In fact…not by a mile.  Somehow, no matter where we went, the outcome was always the same:  NADA.

Next stop?  Same thing.  For all our effort, for all our clinging expectation:  Zip.

What gives? I thought to myself.  I was confused. I was sure the Lord had inspired this idea.  So why weren’t we having success?

Perhaps because Steve and I shared one stubborn, uncompromising resolution.

The resolution?  Just this:

We were not gonna fake this.  If it’s really God, we said, when we see it, we’ll both KNOW it.  Cuz the card’s gonna have to reach up off the rack and smack us both in the face — or it isn’t the Lord.

That was our deal.  And thus far, we were plum smackless.

Moving on, we tried another store.  And again:  NOT.

All afternoon we continued on like this.  Driving about.  Hunting.  Searching.  Praying. Digging.  Pulling out potential cards, one by one.  Showing it to the other.  Only to agree seconds later in deflated unison, “Naaahhh.”  Then back to the rack it went, as the relentless search continued.

OK, now it was serious.  The day was still young, sure.  But we weren’t!  We were hot.  We were tired.  And, above all, a crushing reality was beginning to set in:

It appeared we were fresh out of options.

Sitting inside our car in the Wal-Mart parking lot — exhausted, immobile, and deflated –the engine running to cool ourselves in the blessed air conditioning, Was this really how it was going to end?  I couldn’t accept it.  Couldn’t make myself.  God had promised.  I knew it.  I still believed it.

Yet where was the evidence?  Nowhere thus far!  And that was an inescapable fact I could not deny.

My heart was caught in a wrestling match.

Oh, Lord.  Help.  What’s going on here?   Where is this word from You?  This special anniversary card I believe You’ve promised us?  Why have we not found it?  We’ve looked everywhere.

The wrestling match continued — until!

I looked up.  And suddenly realized!  No, we had not exhausted all our options! There was still one more place we hadn’t yet checked….could it be?

Steve didn’t share my enthusiasm.  “I doubt we’ll find a card in there.”

“I’m not saying I’m not willing to go in there, I’m just saying it’s doubtful,” Steve responded.  He was weary from the chase.  So was I.  But this was our last shot.  And God had promised, or at least sure seemed to, as I felt this whole thing was His idea. Not mine.  Not really.

Onward we pushed.  We went inside.  Straight to the card rack.

And just a few minutes later, would you believe?

There we stood, Steve and I, in the middle of DOLLAR TREE, for the love of Pete, smiling up at each other, as we held — drum roll, please — “THE CARD!”  YES!

THE CARD with the Heavenly Hand inside that rose up outta the rack and smacked us both across the chops!!  Hallelujah!  We got smacked!  This was it!

And here it is.  The Lord’s precious message to us on our 22nd wedding anniversary:

(The message on the front cover:)

Your Anniversary Is a Gift from God

Look back with thanks

for all the joy

the Lord has brought

to all the blessings

for both of you.

God Bless You Both

Steve and I were overjoyed.  All that we’d prayed for, and believed for:  The very words, and the very card we knew came directly from the heart of the Lord to us on this, our 22nd wedding anniversary.  This was it.  There was no mistaking it.

The Card had been there all day, just waiting for us to discover it on our Anniversary Treasure Hunt, hosted by the Lord.

It was an anniversary neither Steve, nor I, will ever forget.

Today I keep this precious treasure ever before me — right here on my desk, next to my laptop.  A constant, daily reminder to me of the great joy that comes when we step out of the box and invite adventure into our relationship with the Lord. 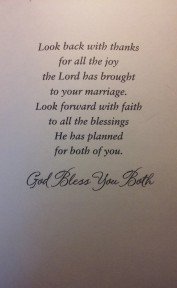 WHAT FOLKS ARE SAYING ABOUT NO GREEN BANANAS

"It changed my life." Channing C.

"It's serious and hilarious at the same time."  R.J.N.

"You will help change many hearts."  Doug M.

"Your sense of humor made a serious topic a delight."  Austin R.

"God is using you to help people get off the fence."  Jim H.

"The most sobering, most valid evidence of Joel 2:28 dreams / visions I have ever come across.  Life changing!"  Jacob C.

Shoot us an email

Before you give: Please be aware that we are not a 501c3, which simply means your gift will not be tax deductible. All gifts should be considered love offerings. If that is still agreeable to you, we certainly welcome your support and thank you from the bottom of our hearts.
Follow HEAVEN'S HEADLINES on WordPress.com